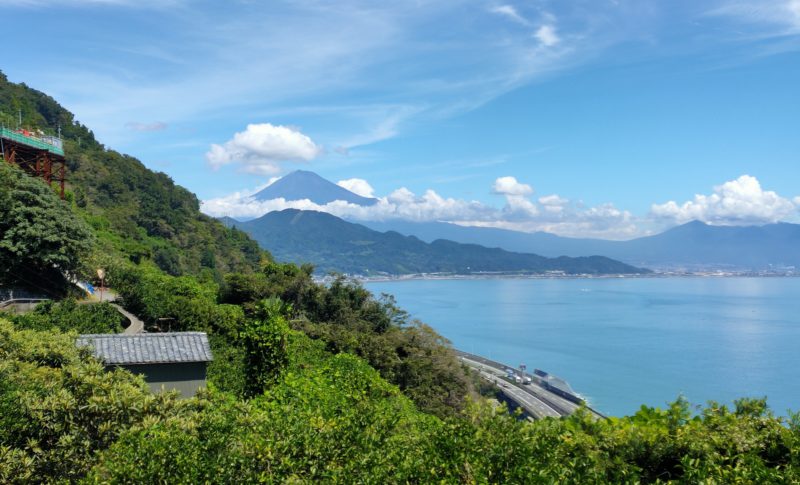 Today, we will go to one place represented in a very famous landscape ukiyo-e :

Satta pass –Satta touge さった峠- is a notorius scenic area in the Tōkaidō road ! The Tōkaidō road, literally the East sea Road, is one of the Five routes used by the Tokugawa Shogunate during the Edo Period to connect Edo -the now Tokyo– to Kyoto. This road follows the East coast, hence the naming. 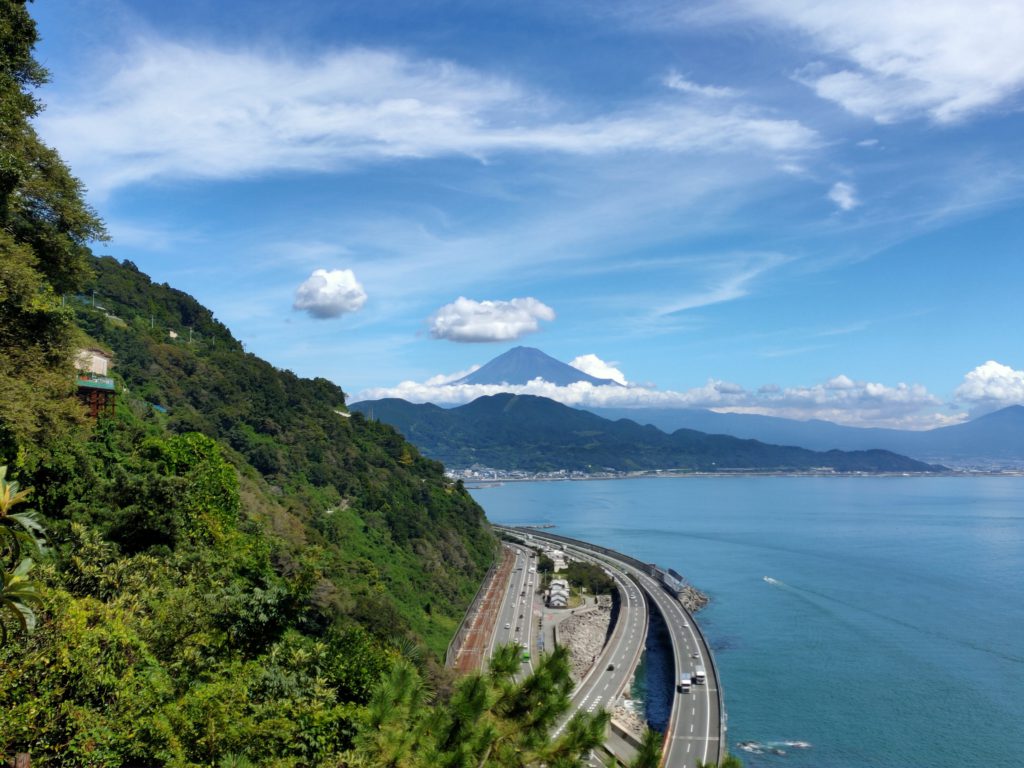 Before anything else… Please have a look at this view first !! Isn’t it beautiful ?? The green of the mountain and the deep blue of the ocean and the sky ! During winter, the white of the snow on top of Mount Fuji adds to the scene.

Till nowadays, the Tōkaidō is the main artery of the vast megalopolis of the same name “Tôkaidô Megalopolis“, where more than 55 million inhabitants live ! It gathers several traffic axes, such as the Tomei Meishin expressway, the National highway 1, the Tōkaidō JR train line, the Tōkaidō Shinkansen line. It is one of the most active transport corridor in the country.
One strategic place of Japan East and West communication is here at Satta touge : as you can see on the picture above, a lot of traffic axes gather on the coast !

The famous ukiyo-e artist, Hiroshige UTAGAWA, painted several time in his life the 53 stations of the Tōkaidō Road.
As said above, the Tōkaidō road connects Tokyo to Kyoto and it represents a total distance of about 500 kilometers. The travelers of the 17th century put almost 2 weeks to journey ! At that time, they went on foot most of the time. Depending on their statues, it was also on horseback or in cubicle of braided bamboos – kago-, or in palanquin –norimono-. During their journey, they rested in lodges –yado– along the road. 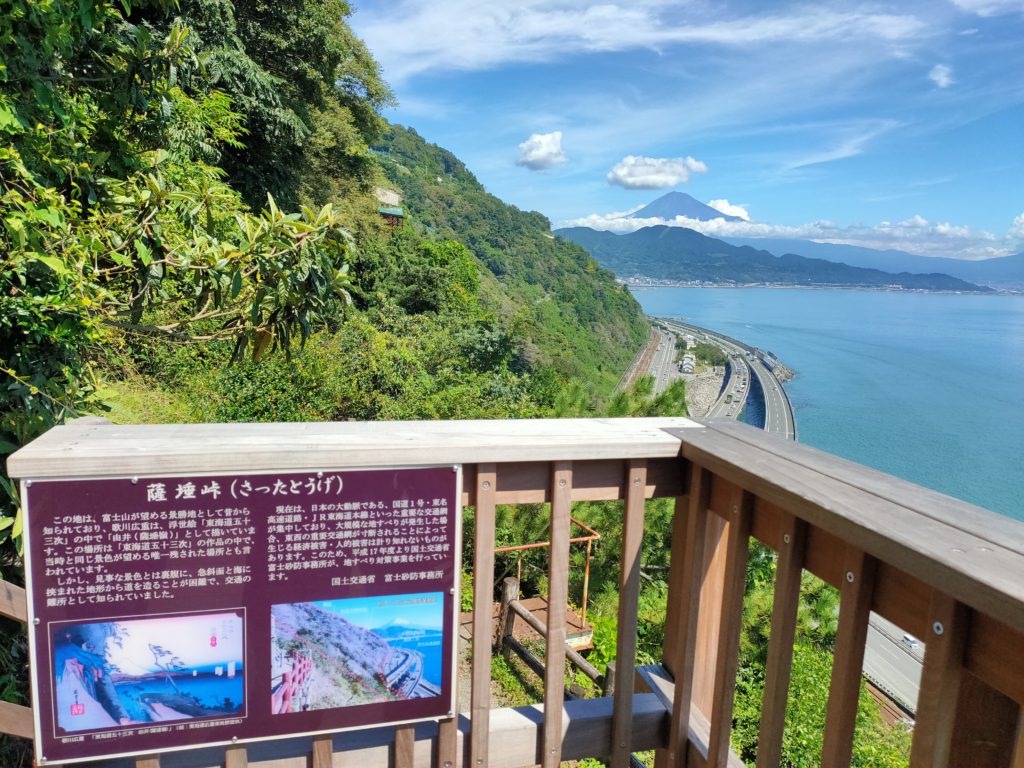 Those stop and the landscape around the road were sketched by Hiroshige during an official procession in which he was invited. It is said, he directly started to carve the woodblock for the Fifty-three Stations of the Tōkaidō when returning home.

The 16th one of that serie is the Satta Pass, located in Yui ! There is a viewing platform on the way from Okitsu to Yui from which you can compare the landscape as seen by Hiroshige UTAGAWA and the actual scenery. 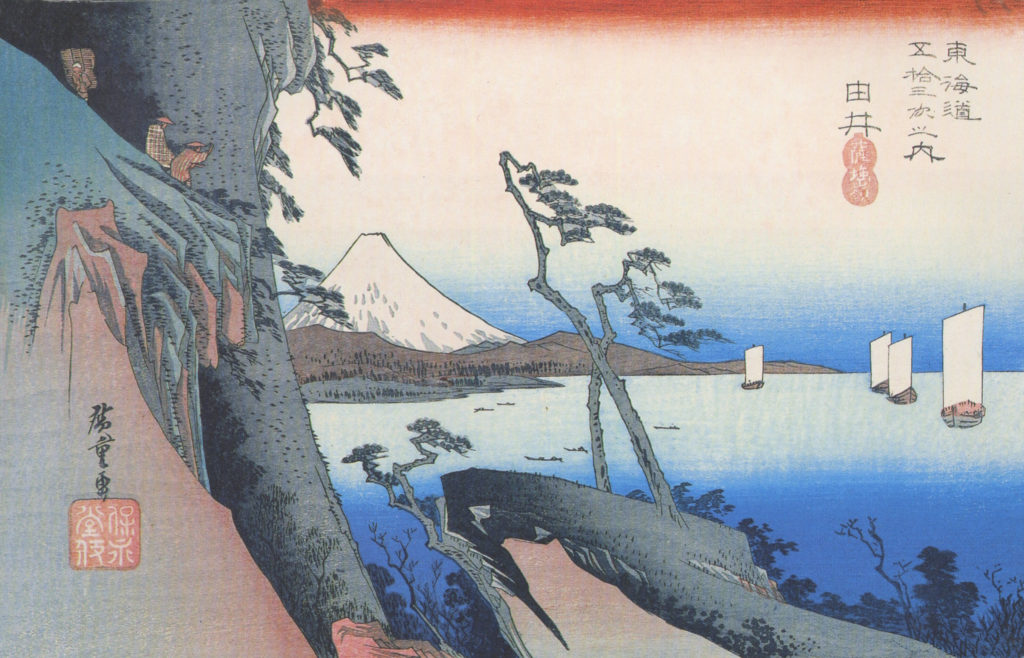 This is the representation of the Satta pass which shows the way between the inn in Yui and the one in Okitsu. It was actually more of a cliff than a road and Hiroshige expressed how difficult this place was with a bold composition full of tension. Imagine yourself on the same abrupt cliff ! He also puts some humor in it : if you look closely, there are three characters on the ukiyoe, two travelers and one local. The travelers looks impressed with the view of the Mount Fuji, which is no more special to the local who goes his way nonchalantly !
I must say we where very much like the two travelers at the same place 😀 The view is really mind-blowing !

On clear weather day, you have a wonderful view of the Mount Fuji, the Suruga bay and the Izu peninsula !

It is said that it was only after the coast was raised by the great earthquake in era Kaei year 7 (in 1854) that it became possible to pass the coastline safely without passing through the difficult trap.
Now, there is a nice hiking trail starting at Okitsu train station to the viewing spot, then to Yui station. Please count around 3 hours to realize the course ; counting that you will stop regularly to just look at the view 😉 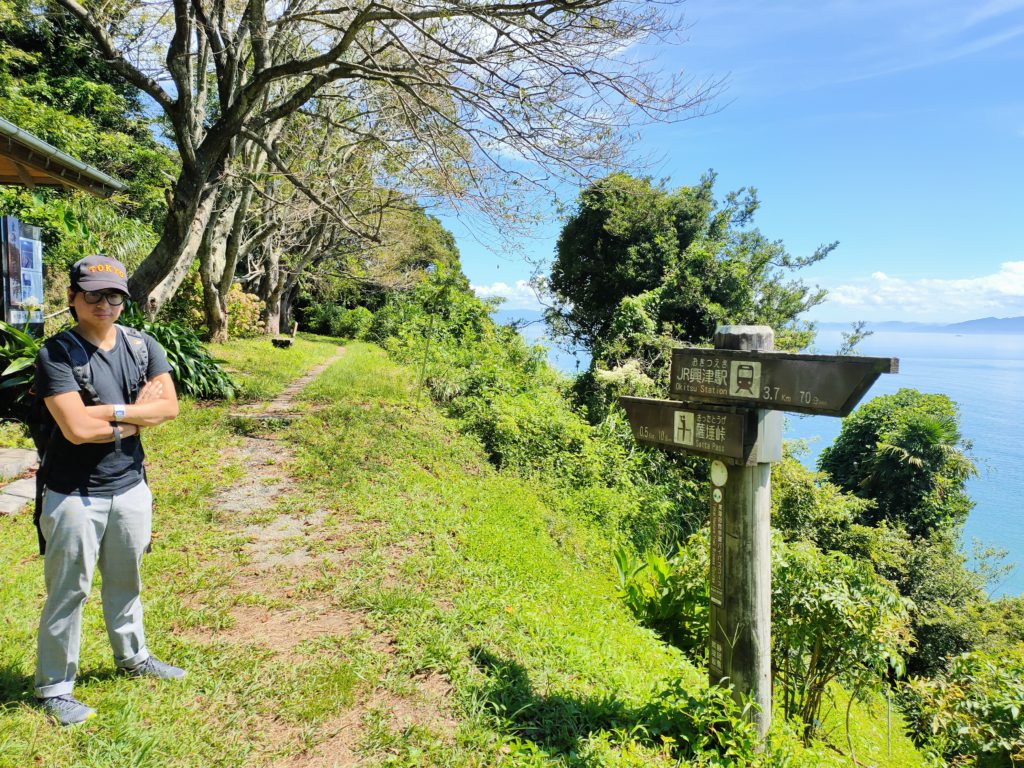 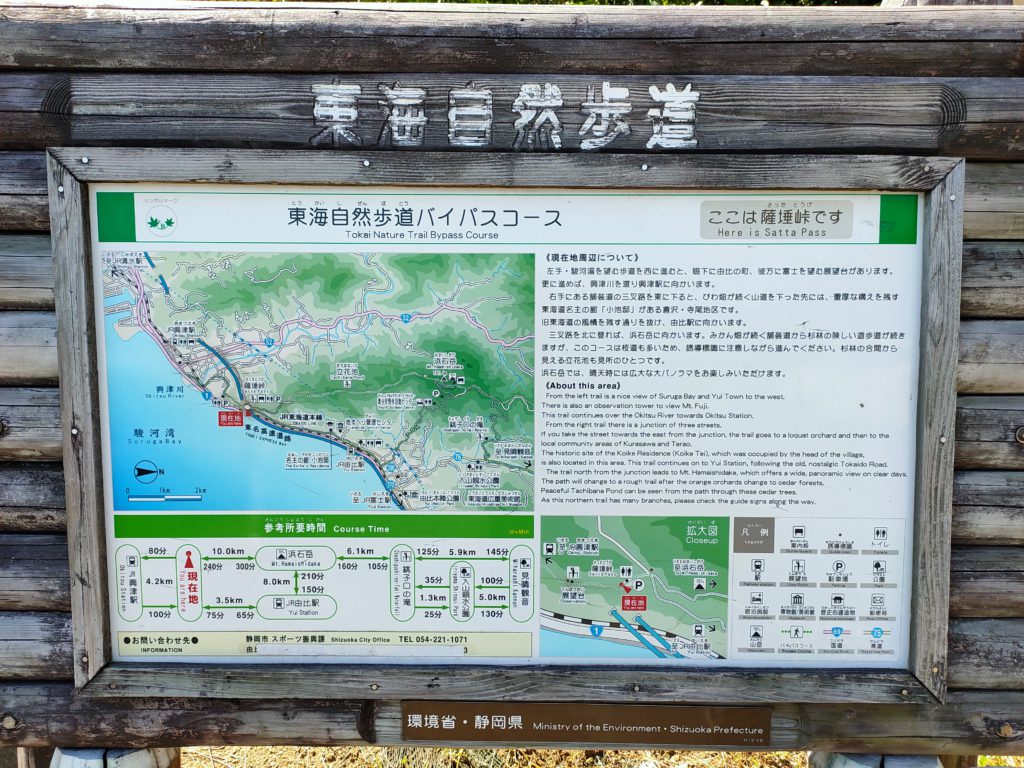 Take a breath in the small shed along the way !

Mount Hage, which was depicted with black pine in the ukiyo-e, is a slope where various fruit trees, with mostly Shizuoka‘s mandarin oranges, spread. You will come accross many of them ! 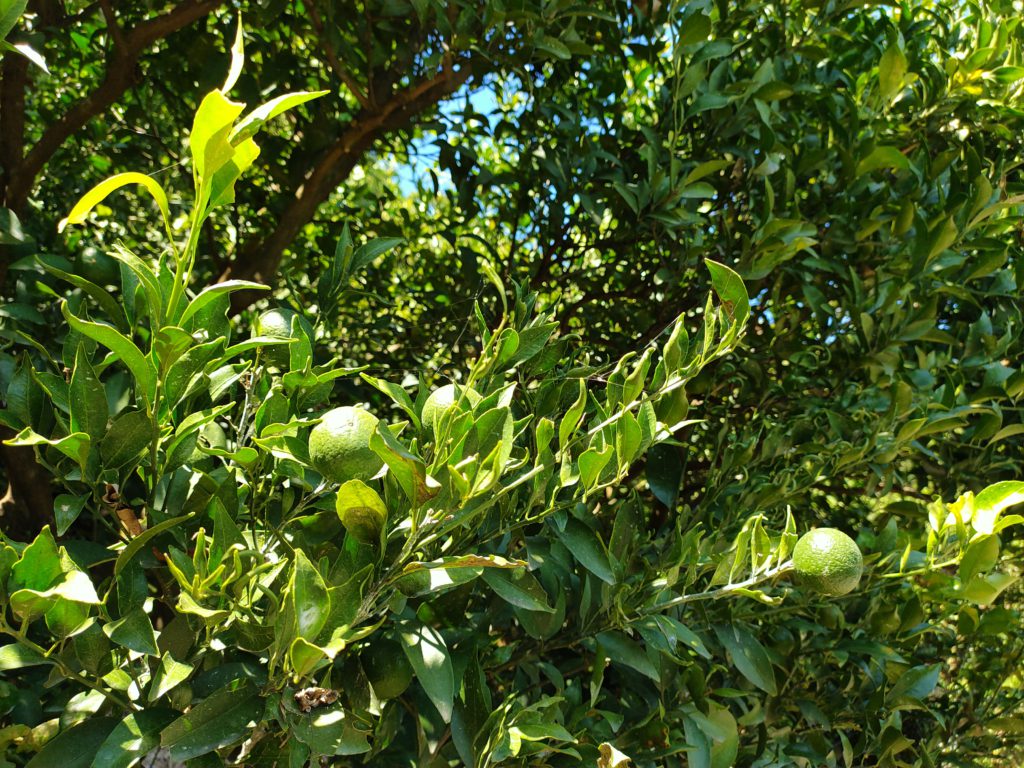 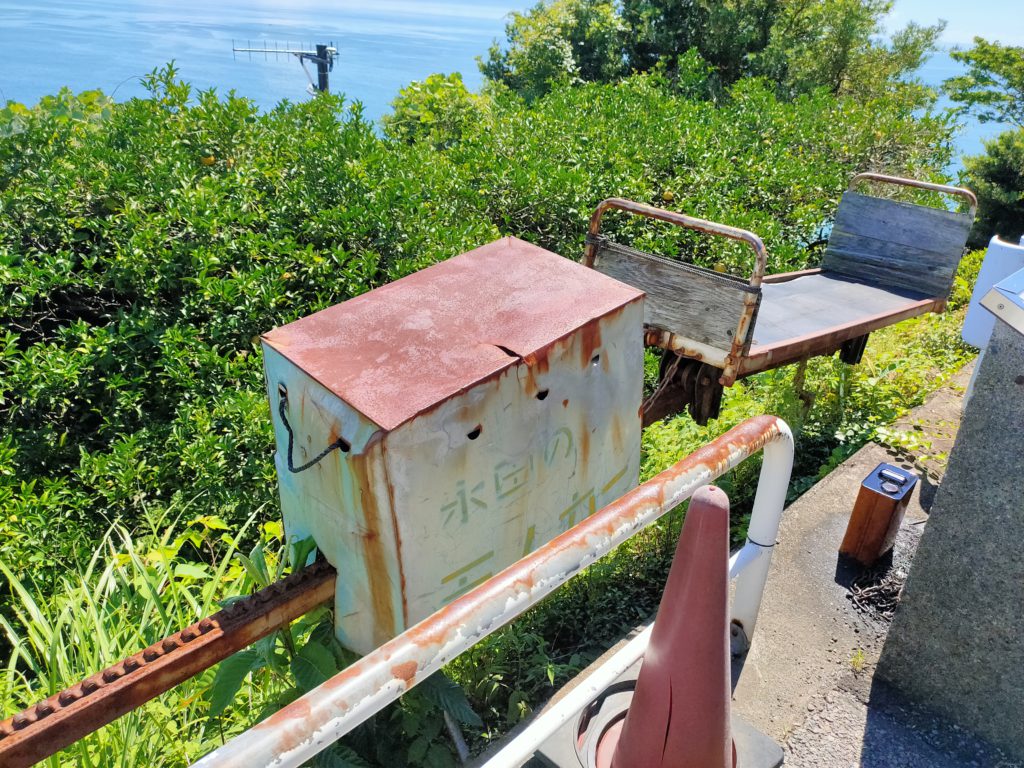 You can enjoy the flowers, then the orange changing color during your stroll, depending of the season !

We had a glimpse of Hiroshige’s art in this post. Our next stop will be at Yui in the Tokaido Hiroshige Museum of Art ! It is located where the Yui stop –Yui shuku– used to be for the Tôkaidô travelers to rest !

Satta pass is a magnificent spot overlooking Mount Fuji, and a relaxing Tôkaidô landmark that overlooks Suruga Bay and the Izu Peninsula. Wouldn’t it be nice to take a leisurely hike from Okitsu Station to Yui Station as did the travelers in Edo and along the way discover the famous places of Yui ?

You can include Satta pass to your tour in Shizuoka !