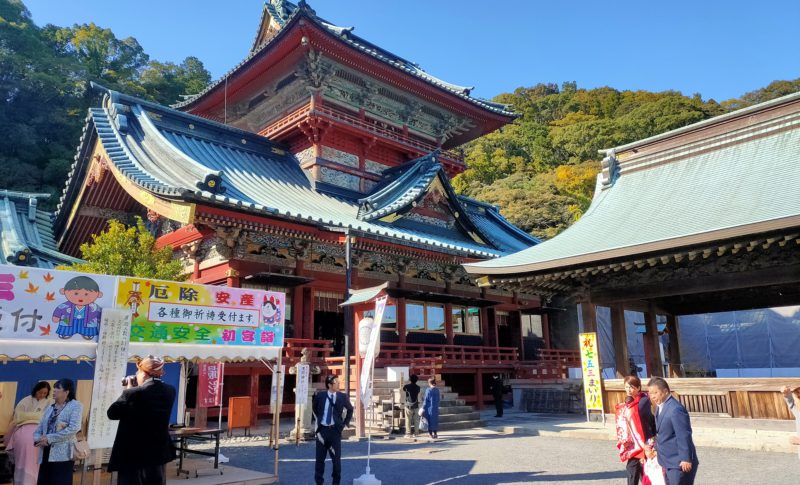 Year 2019 is an important year in Japan, with the arrival on the throne of new Emperor Naruhito. This means the beginning of a new era as well : Reiwa era.

Special Shintoism ceremonies have followed the enthronement. Recently, on November 15th, Daijousai 大嘗祭 has been held. It is a ceremonial in which the new emperor takes the new grain to the gods and eats it. The significance of this is to thank and pray for the nation and the people at the Okuma Shrine, for their peace and well-being, to the Emperor Amaterasu Oo-kami and Amatsu Kami.

Today, I would like to introduce Shizuoka city largest shintô shrine : the Shizuoka Sengen Shrine.

The three shrines : Kanbe Shrine, Asama Shrine and Otoshimioya Shrine, are collectively called Shizuoka Sengen Shrine. They are the guardian deity of Shizuoka, affectionally called “Osengen-san” by the local population. There are 4 more shrines in the precincts of the Sengen Shrine, all 7 shrines are now forming a single religious corporation.

If you come from the center of Shizuoka city, you will most likely enter from here : 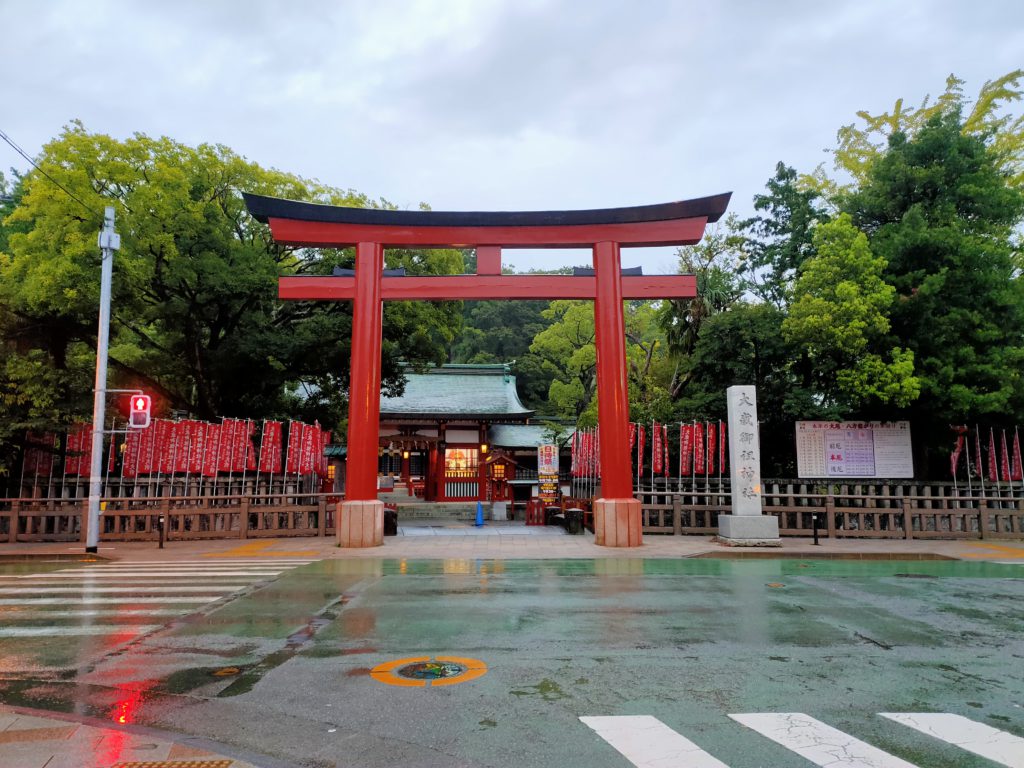 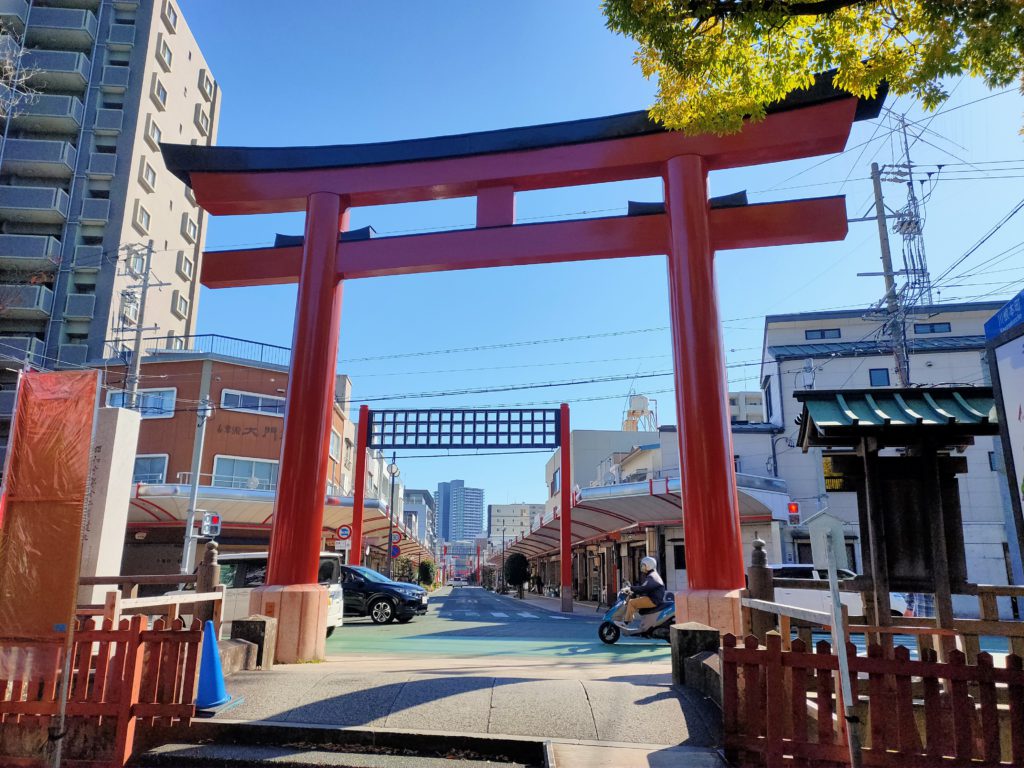 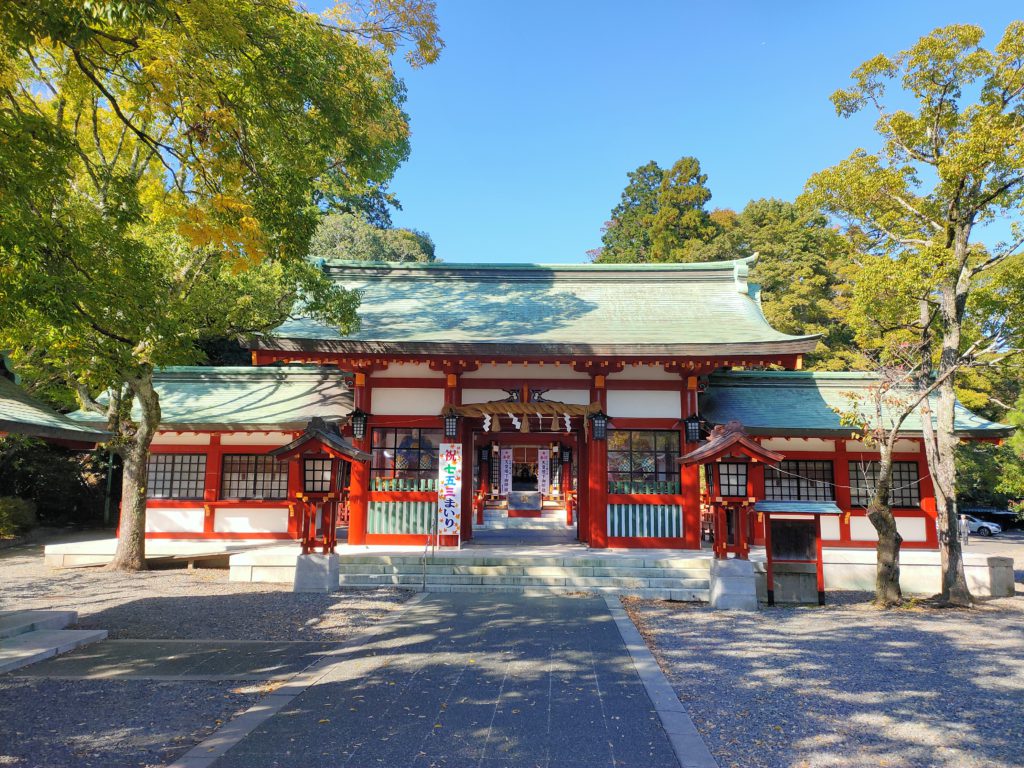 Here is the gate before Otoshimioya shrine.

Otoshimioya shrine was founded about 1700 years ago by Emperor Ojin (273) and was established as a guardian deity of “Abe no ichi” or “Abe market”, an ancient logistics hub and commercial center. The deity is known as “Nagoya Myojin” and he is the landlord god of Shizuoka City. 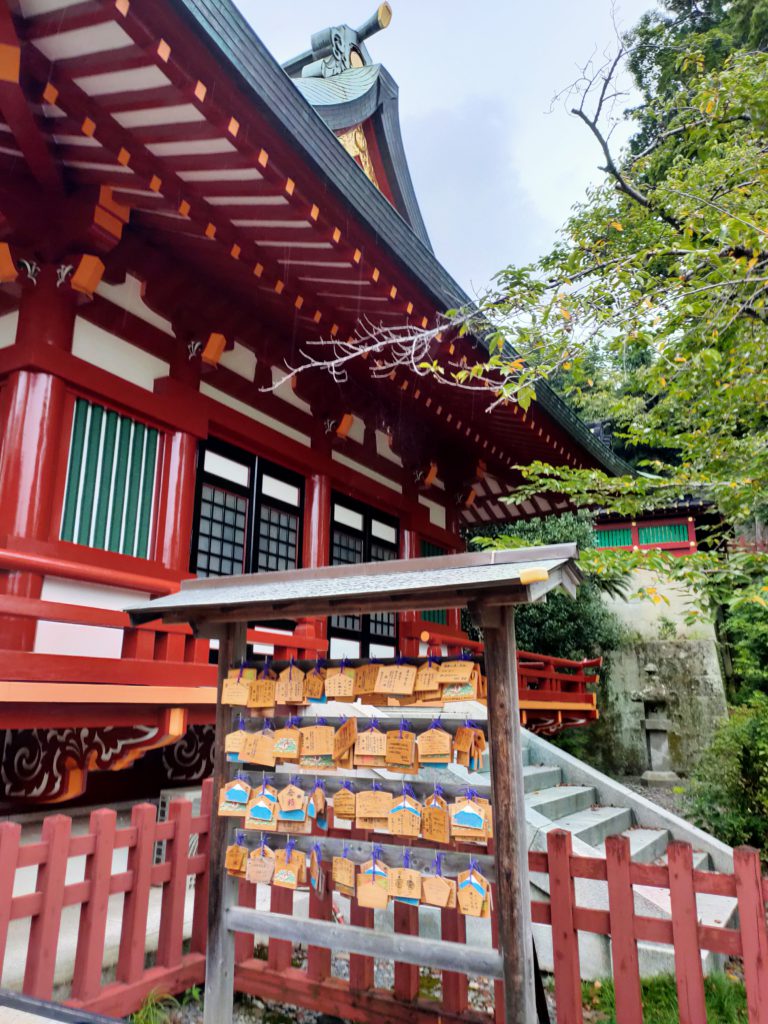 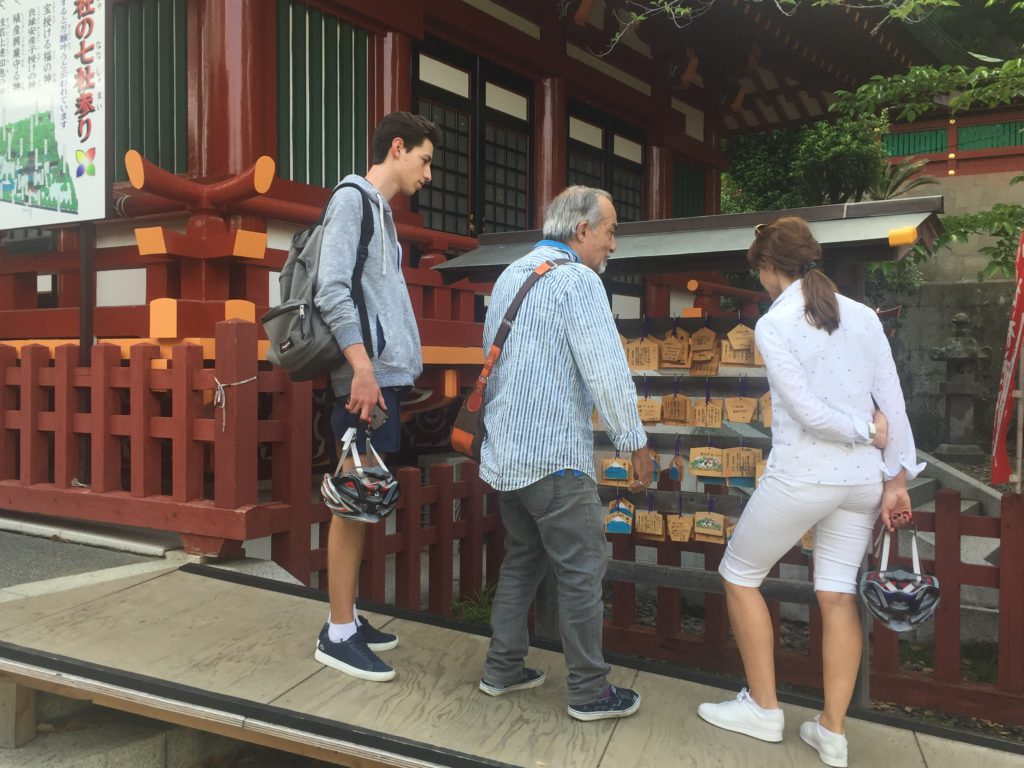 You can write down your wish to the deity of the shrine on the ema and hang it here.

The deity of Kanbe shrine is Ohnamuchi-no-Mikoto, who is regarded as the mythical founding deity of Suruga Province – the now Shizuoka prefecture. Kanbe kami is the ancestor of the Tenth Emperor Takagami, and was enshrined about 2100 years ago as the great god of Suruga. The Kanbe shrine is the oldest in the region !

Asama Shrine was separated from Mount Fuji main shrine by the will of Emperor Kan, in 901.

Both shrines, or both deities, are inside this one building, called Ohaiden : Standing in the vast precincts are magnificent shrine buildings such as the bright vermilion Rômon Gate (in restoration at this date), the Ohaiden Hall, and the main shrines of Kanbe and Asama shrines. In front on the Ohaiden, stands the Buden. There, young boys dance the “chigomai“, which is said to have moved Lord Ieyasu. It is dedicated during Hatsukaesai, the annual festival in April. 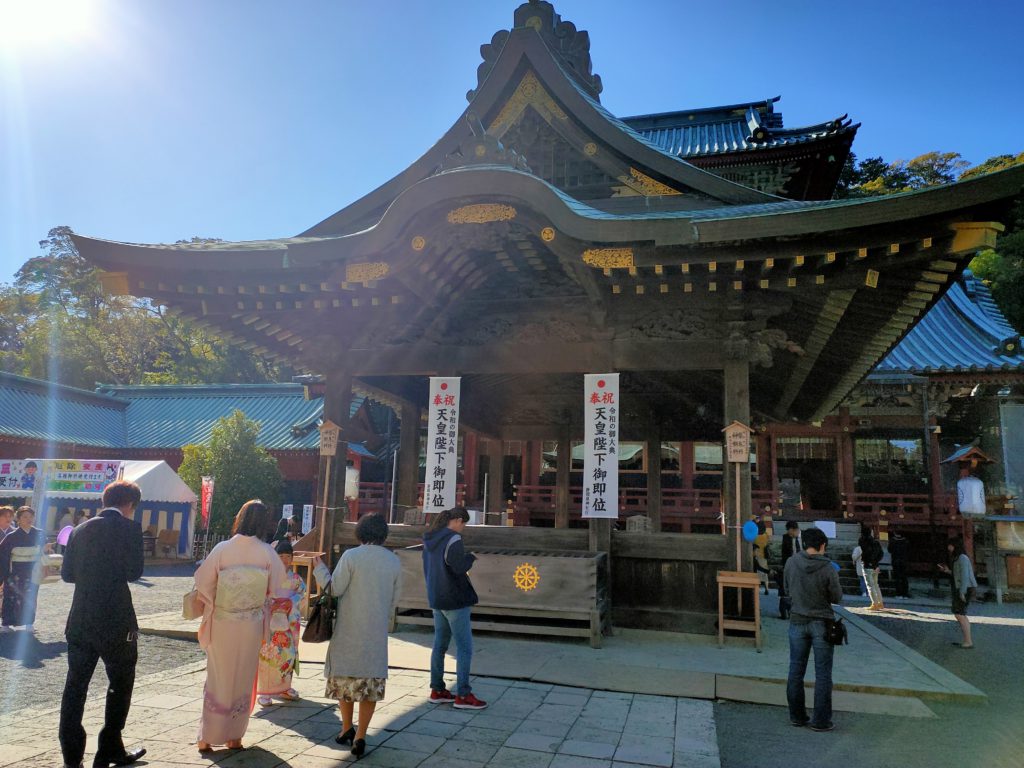 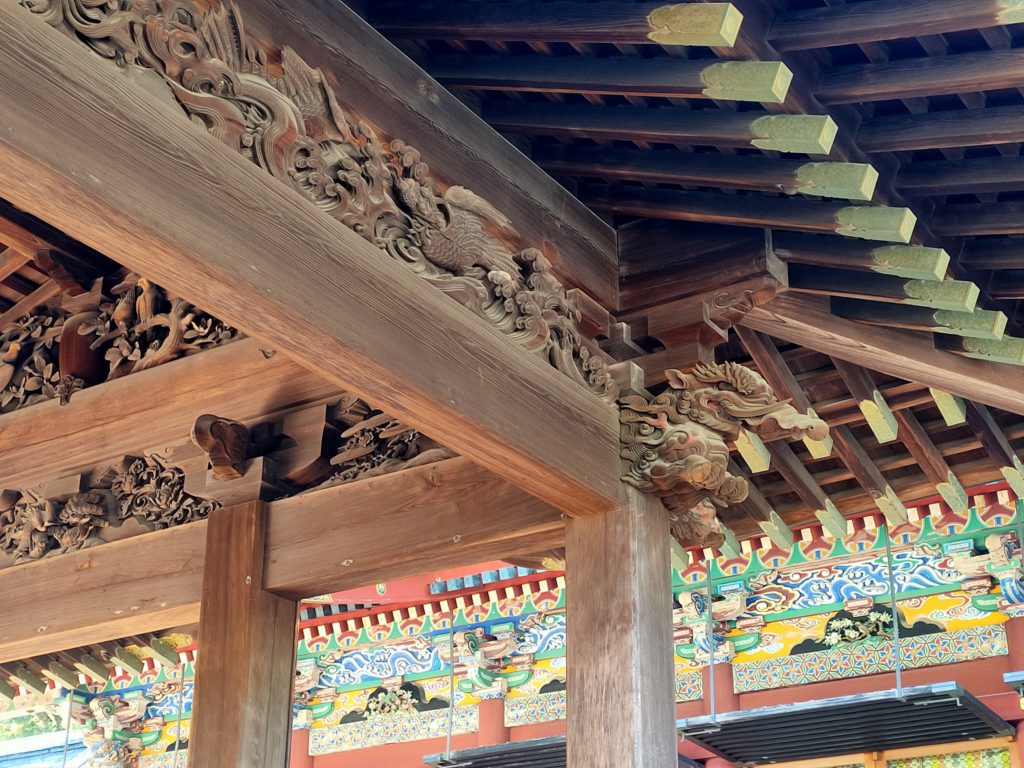 The Buden is the only wooden building in the shrine built in the late Edo period. Tachikawa style sculptures can also be seen here (as seen on the picture above). The shrine’s annual “Hatsukaesai Festival” has a history and tradition of more than 450 years ! It has been regarded as Suruga big festival since before the Imagawa period and is held every year from April 1st to 5th. In addition to various others festivals during the period, there are floats and shrine tours, performing arts dedications (like the “chigomai” above), and stalls.
(The picture above comes from Shizuoka matsuri website) 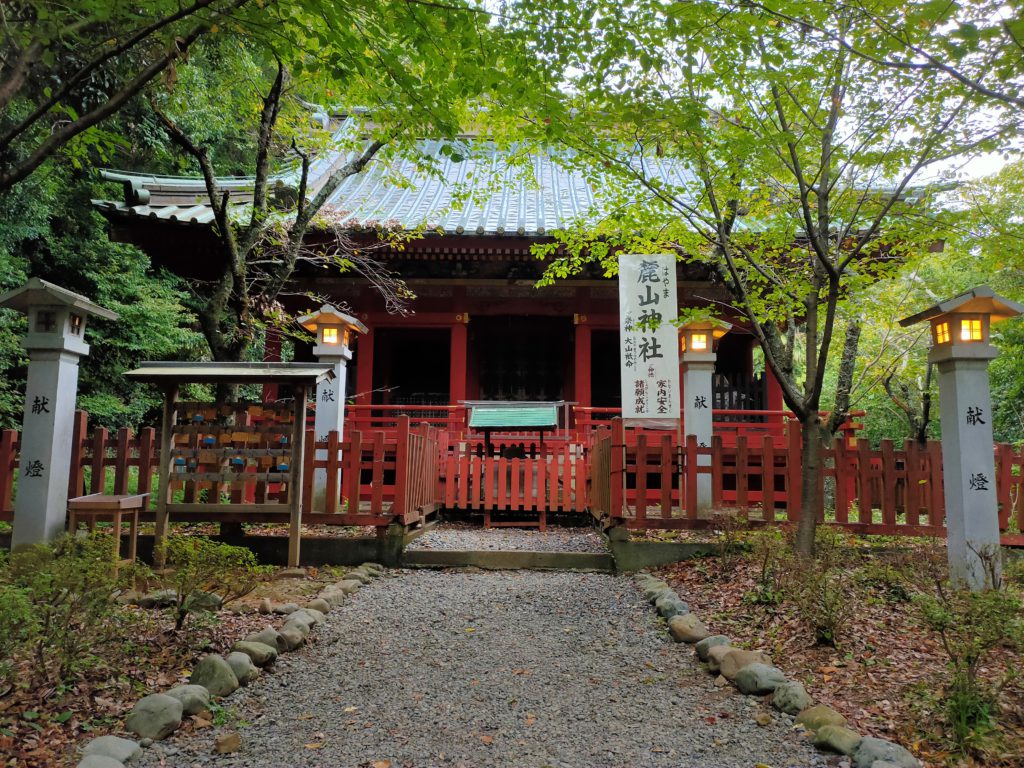 Here are the 4 others shrines within the Shizuoka sengen shrine.

It is said that if you pay a visit and pray at all seven shrine, all your wishes will come true !

Also one can bring his newly bought car to the shrine to pray for traffic safety ! If you pass by, you might see it 🙂 Many beautiful spots and detailed sculptures. Those “bottle look-alike” hanged with the ema are called hyoutan. Those are closely connected to Ieyasu Tokugawa. 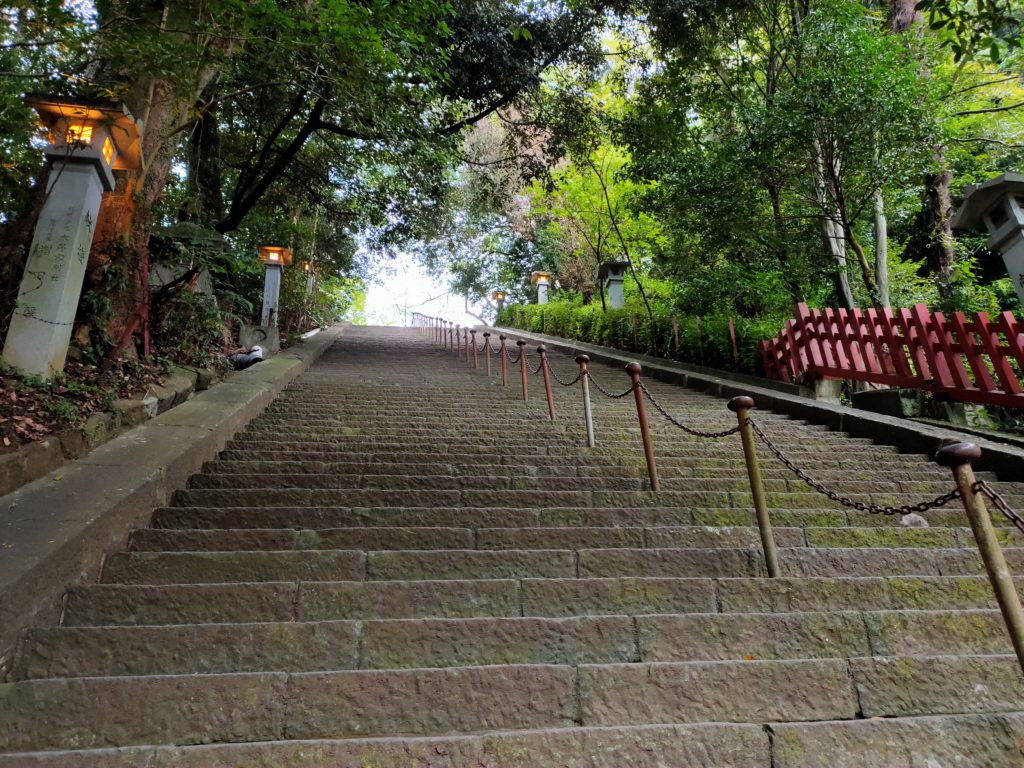 A nice walk to enjoy : around the lake and inside the mountain. The Hayama shrine is located on top of those endless stairs.

Others things you might want to know before visiting a Shintô shrine :

At the entrance of every shrine you will find a basin like this one. One purify his hand and mouth before visiting the shrine. Our guide will without doubt show you the way it is done ! The Shizuoka City Cultural Assets Museum, where precious documents connected with the Imagawa and Tokugawa families are preserved and exhibited, is located within the Shizuoka Sengen Shrine as well ! Why not have a look ?

If you are visiting Shizuoka city, the Shizuoka sengen shrine is one place to not miss. The different shrines all has their personality. The grand and brilliant main buildings are richly colored in urushi coating. Today, 26 structures in the shrine complex are protected by the national government as Important Cultural Properties, forming one of the largest such complexes in the country !
During my short stay in Shizuoka, I have already been there 3 times and each time there was a new discovery. It is lively, with festival of all kinds. Definitely a way to have an insight of the japanese culture.

You can include the Shizuoka Sengen Shrine to your tour in Shizuoka, by bike or by taxi !