Last January, our internship student wrote an article about Kunozan Toshogu, have you seen it already ?
I won’t write another article about the national treasure but I will present one particular event at the Kunozan Toshogu : The Tenka Taihei no Takeakari 天下泰平の竹あかり, or The Bamboo Illumination of the World peace, in English.

This year from April 27th to June 30th, for a limited time, we could visit the Kunozan Toshogu in Shizuoka at night, following the bamboo light : 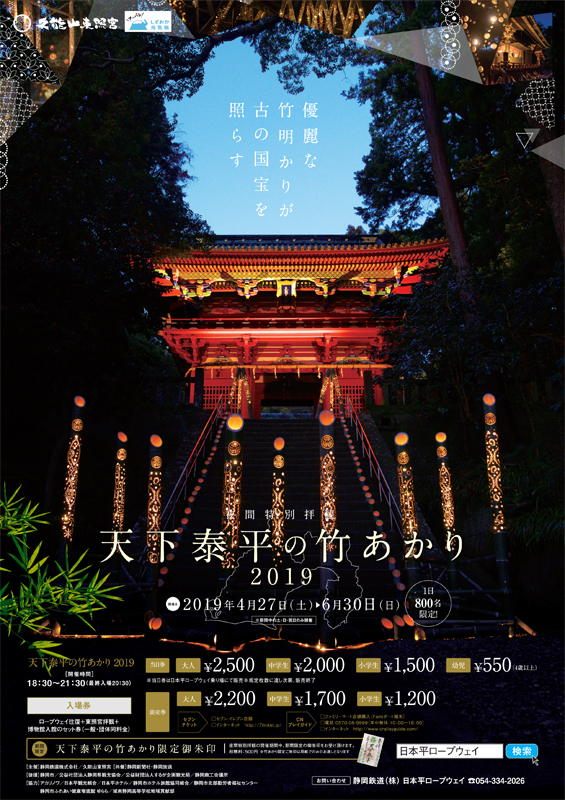 It was the second time this event took place. It is only during the week-end and on holiday (like Golden week). And it is already planned for next year, if you’re interested !

Usually by day, you have two options to go to the Toshogu : by foot through the 1159 steps stairway till the main shrine, or by the rope-way from Nihondaira. At night like this time, for security reason, you can only access by the rope-way.

I’ve been there with some friends the last week-end of the event. Our ticket was for the entrance at 8:00 pm. There was a lot of people  and we had some difficulty to find a parking place… You can only access by car or by taxi, I will write down the details later on.

That day, there was also the Nihondaira night market ! It takes place every 4th Saturday each month. You can enjoy street food, handmade shops or music event ! It was very lively, there was a lot of people from children to elder and all were having fun ! 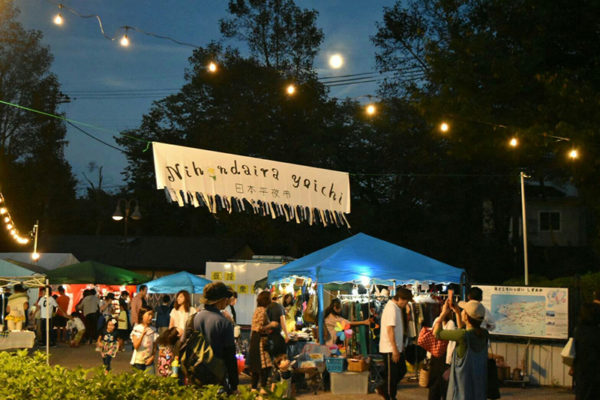 After a quick tour of the night market, we headed to the rope-way ! At 8:00 pm in Japan during summer, it is already pitch black… It is a 5 minutes ride approximately to the shrine. You go on a gondola with the Tokugawa family crest on it ! Inside the cabin, you’re already put in the light up ambiance with suspension of bamboo light. By day, you can see the Suruga bay, but here was the view that night : 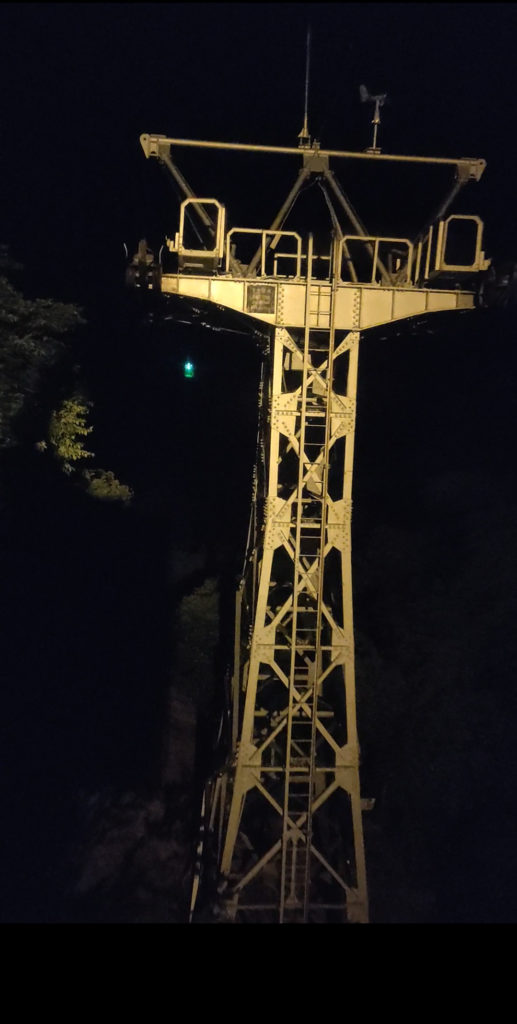 During our ride, the tour conductor explained us that there is around 200 bamboo lanterns used for the event. The event was conducted by Akarinowa : アカリノワ.

Actually, there is a lot of devastated bamboo forests, due to its proliferation. When a bamboo forest is not taking cared of, it can be linked to landslide and also impact the biodiversity. That is how Akarinowa came up with the idea of Bamboo lantern.  But their goal wasn’t just to let the bamboo end as just “beautiful”. The bamboo used for the illumination are recycled afterwards, so there won’t be any waste ! They make a fire out of them at the end of the event, and use the bamboo charcoal as local resources : soil conditioner or for water purification.
Akarinowa wished to give those bamboos a second and third life by using them that way. 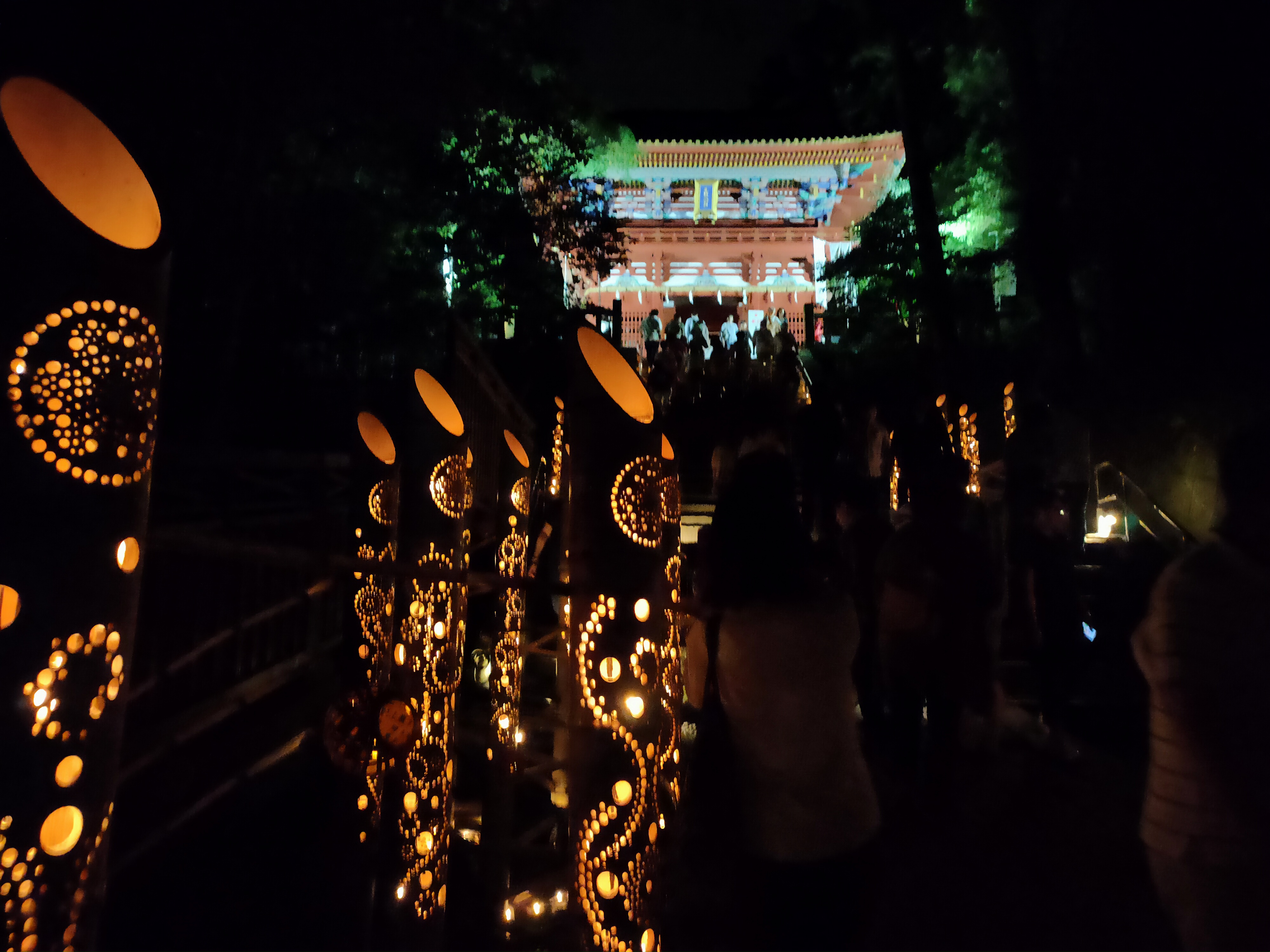 The light leaks from the countless holes in the bamboo lanterns and gives this mysterious atmosphere.
Kunozan Toshogu enshrines Ieyasu TOKUGAWA, who was deified with the deity name Tosho-okami, hence Toshogu (-gu meaning shrine). Ieyasu TOKUGAWA is an important figure in Shizuoka history. He brought peace and unified Japan in a time of long tumultuous civil war. And the Kunozan Toshogu, build after his death, depict his lifetime. 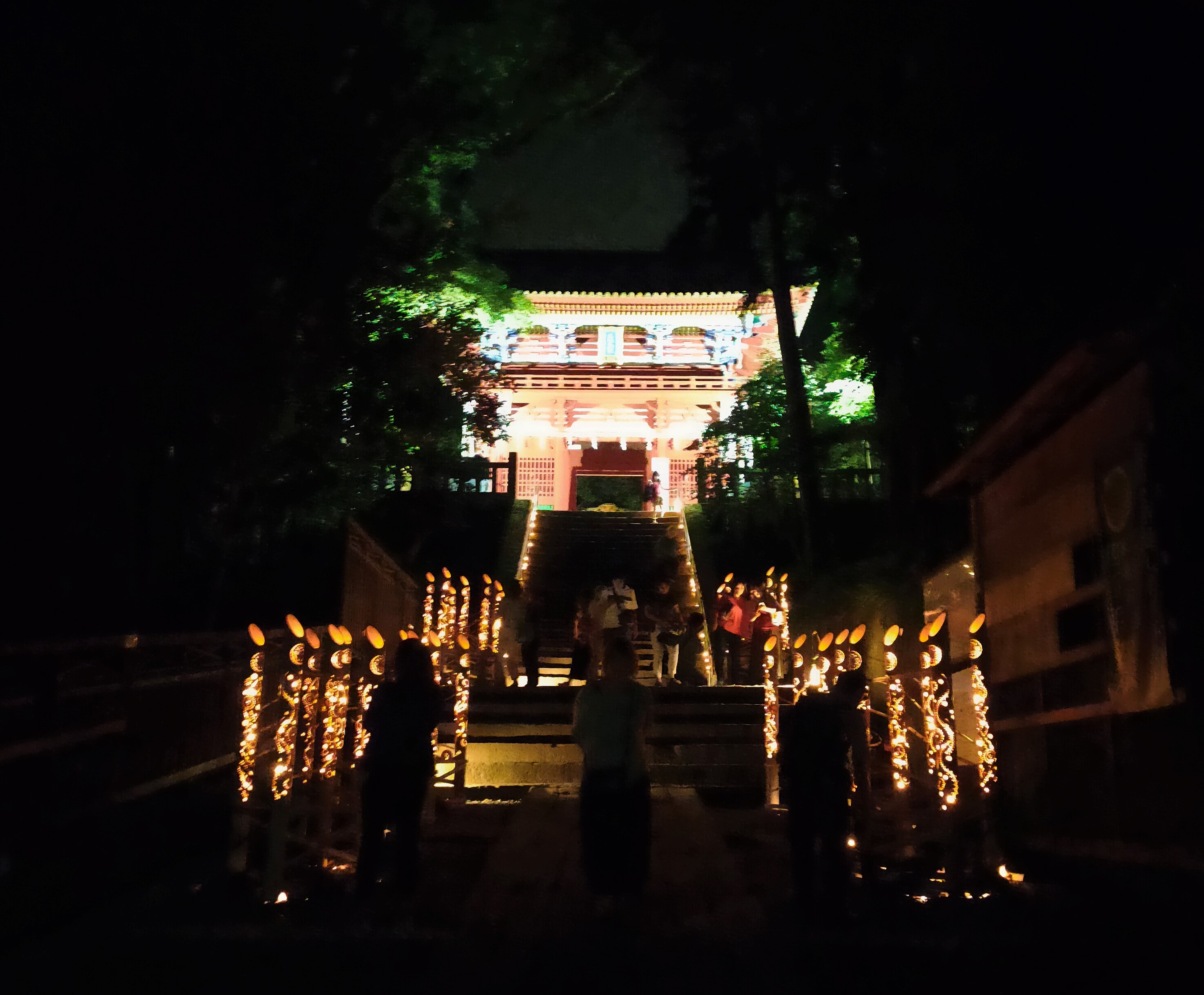 You first go up the stairs and go through the Romon gate 楼門 to go to the main shrine. . The gate is beautifully painted in vermillon and gold. The Toshogu has many sculptures and paintings that one can admire. And seeing them at night adds to its magnificence. 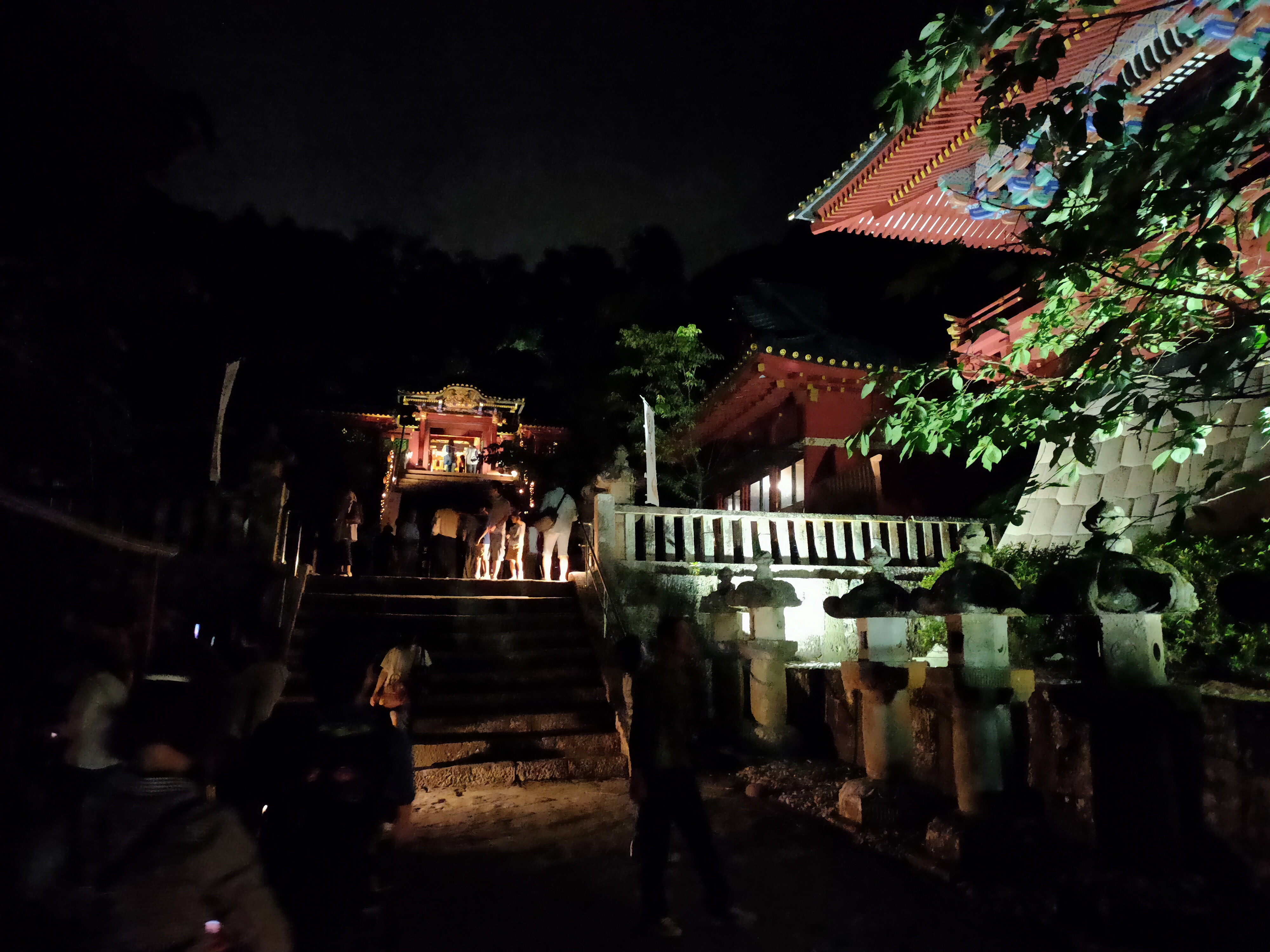 Behind the Romon gate, you have at your right the Korou 鼓楼, or drum tower. Initially, there was a big bell inside, but it was replaced with a drum during Meiji era.

At the top of the stairs, you can see another gate : the Tô-mon 唐門. 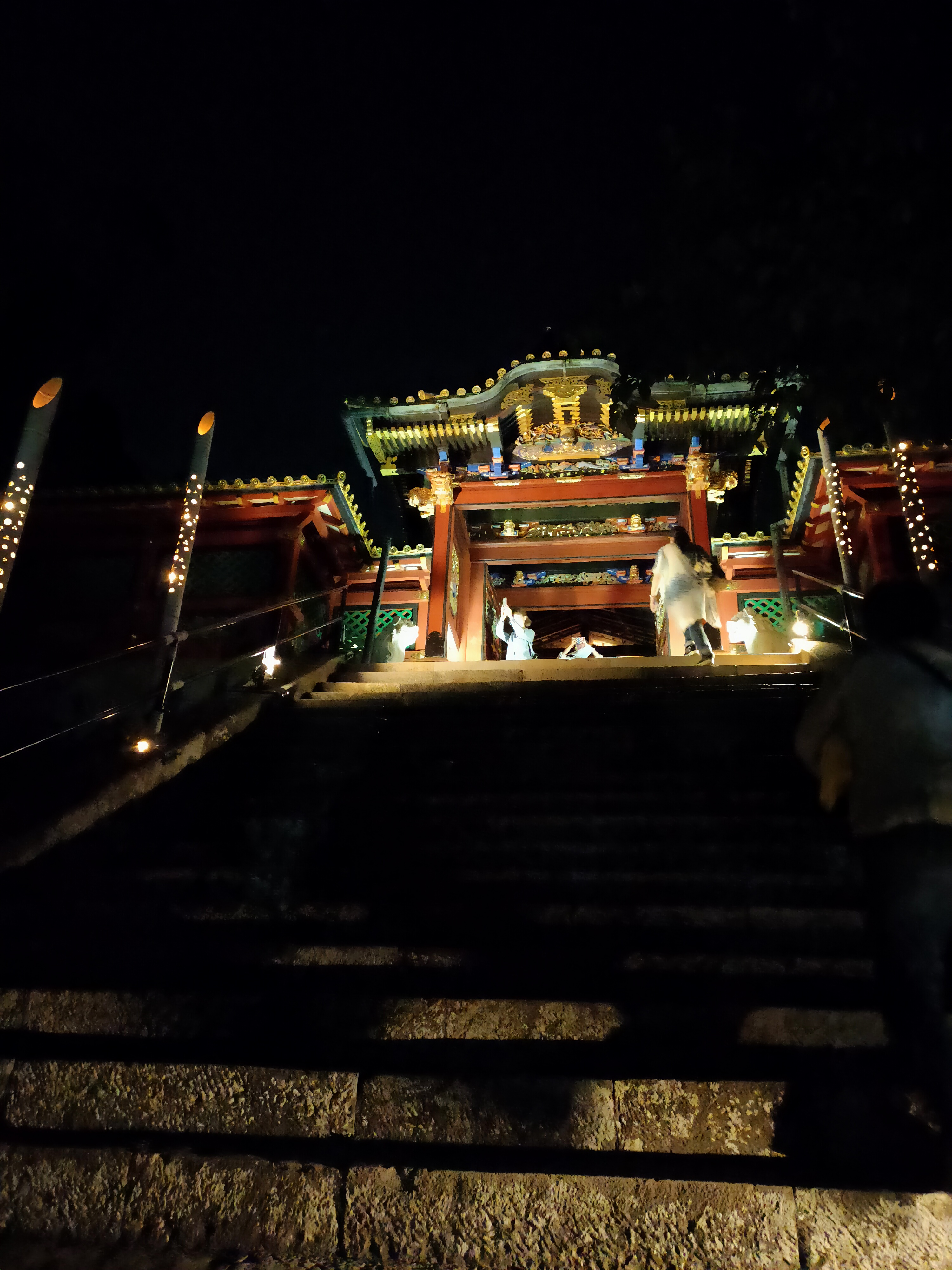 After going through that last gate, you will arrive at the O-shaden 御社殿, the main Shrine where you can pay your respect to the deified Lord Ieyasu. 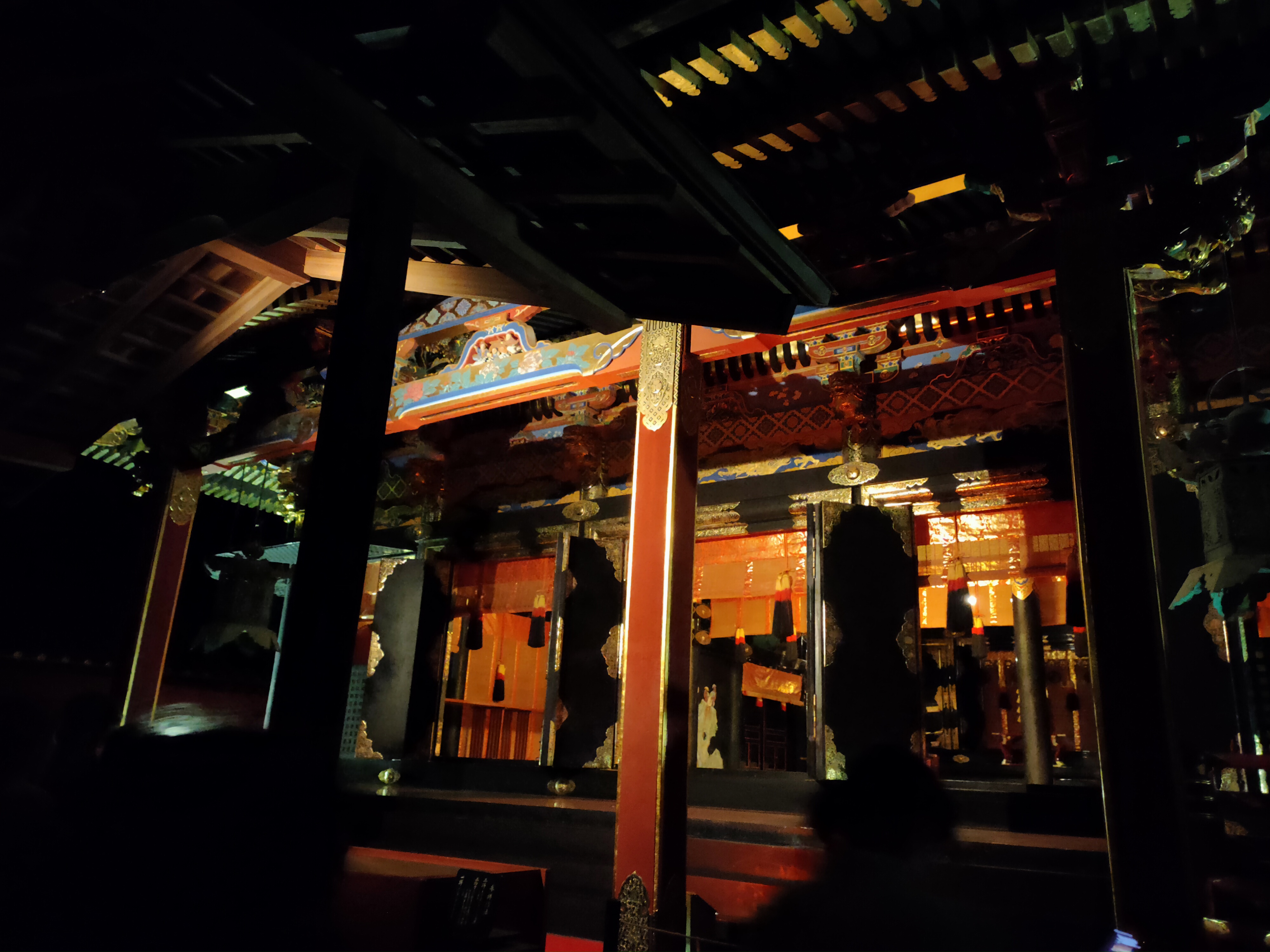 The main shrine was build in the style of Gongen-zukuri. Ieyasu TOKUGAWA was also known by the title Gongen-sama during Edo period, hence the naming. Its particularity is the presence of the ishi-no-ma : it literally means stone room. Although here it is not made of stone and it replaces the corridor which connect the differents buildings of the shrine. It was the first shrine in that style, and it becames a standard in the architecture of Shrine and Temple from then on. All others Toshogu were build following this special architectural standard : you may know the famous Nikko Toshogu in Tochigi prefecture ? It is probably the most famous Toshogu although it was build after this one in Shizuoka.

One thing you will observe during your visit is that there are a lot of detailed sculptures or paintings. In many of them, birds are represented. Birds are a symbol of peace, the Master craftsman Masakiyo NAKAI really wanted to show Ieyasu TOKUGAWA’s role for a peaceful era.
There are also a lot of Tamagaki 玉垣, or fences : 106 in total. The original artist of those many scultpures is unfortunately unknown but generations of Shinto priests have worked to preserve them intact. 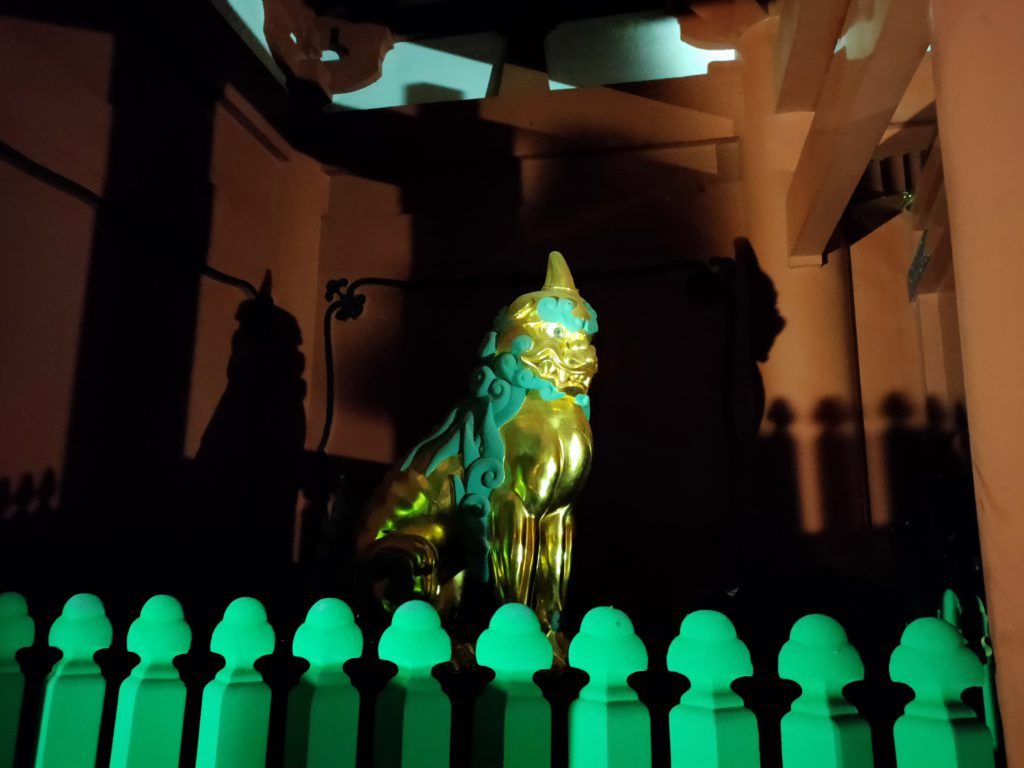 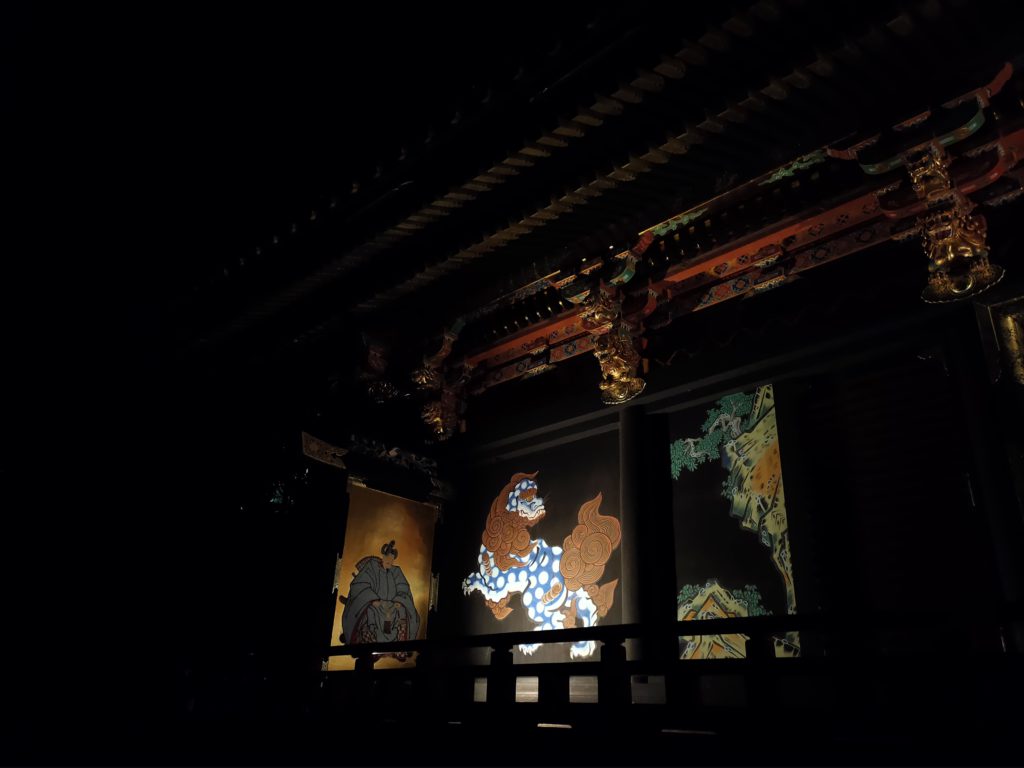 At the end of you ascension, you arrive in front of the mausoleum where Lord Ieyasu rests : the Shinbyou 神廟.
It is different to visit at night like this, it is something you don’t commonly see : quieter than day time ; it was quite a solemn moment. 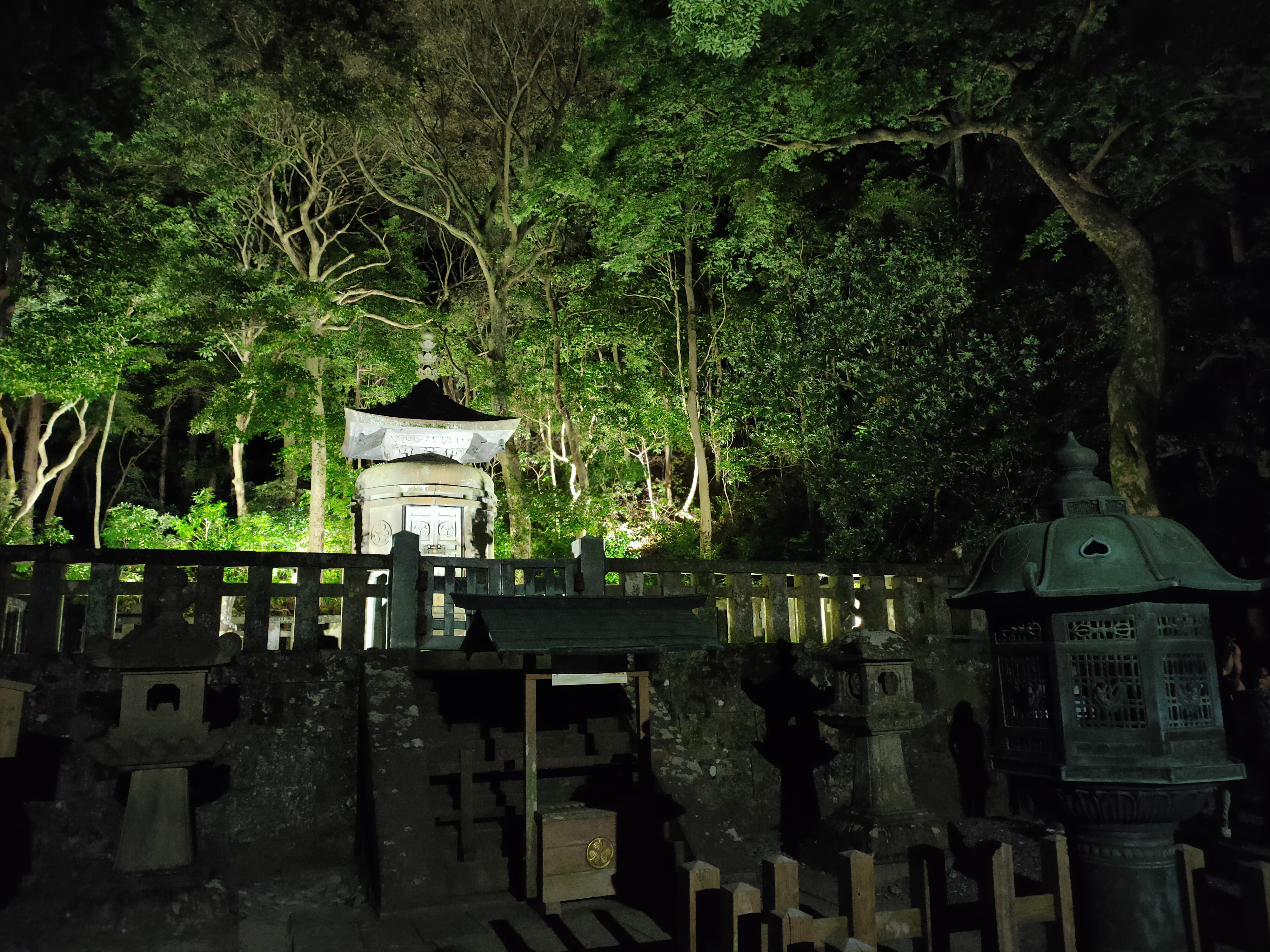 The grave is oriented West, in the direction of his birthplace Mikawa, and the ancient capital of Kyo, in respect of Ieyasu’s will.

If you visit Kunozan Toshogu at night during that time, you may ask for a special Shuin. A Shuin 朱印 is a seal stamps given to worshippers who visit a Shinto shrine or a buddhism temple. It is usually in exchange for a donation to the shrine or temple. Those are special seals as they have the bamboo for the event, and it even glows in the dark ! At the top of the seal, it is the Tokugawa clan Mon, or crest : «the triple hollylock».

Also, the Kunozan Toshogu museum was also open during the event. A lots of arts and objects are displayed, from Ieyasu TOKUGAWA personal belongings to Historical documents. Among them, you will find the 16th century European clock, Lord Ieyasu received from the king of Spain ; you can hear till nowadays the sound of the clock as he did himself more than 400 years ago !

After the visit, we returned to Nihondaira using the ropeway in the last gondola with the crew of the ropeway.  We made the most of our stay ! We decided to go to the Nihondaira Plateau.  It would have been a shame not to go ! At the end of last year in November 2018, opened the Nihondaira Yume Terrace, 日本平夢テラス. It is a stylish observatory from where you can observe the Mount Fuji, the port of Shimizu. You have a big 360 degrees panorama aroud Nihondaira Plateau ! Nihondaira was once nominated as Japan’s top out of a 100 tourist destinations ! And you can access the observatory at any time ! Here is the night view of Shizuoka city !

Did you know that Shizuoka prefecture has an important craftsman community and history ?
It actually traced back to Ieyasu TOKUGAWA’s time. When he builded Sumpu castle, he gather the finest craftmans from the entire Japan. They were also called to build the Kunozan Toshogu. Then lots of them establish in the prefecture.

I could see beautiful painting and sculpture during the visit of the Shrine. The idea of using Bamboo for lightning it up, and carving them. The shop exposing at the Nihondaira night market, bringing their handmade objects. All of these are maybe the heritage of those craftsman spirit. Is what I thought for myself…

Thank you for accompagning me !

You can visit Kunozan Toshogu and Nihondaira plateau in different tours we propose on our website !